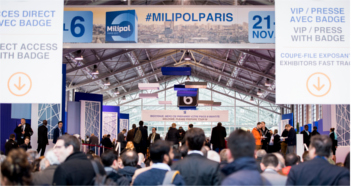 The 20th edition of Milipol Paris, held from 21 to 24 November 2017 at the Paris-Nord Villepinte exhibition centre, posted record figures, particularly in terms of visitor and exhibitor numbers.

This Worldwide event for Homeland Security, inaugurated by Gérard Collomb, Minister of State, Minister of the Interior, welcomed nearly 30,000 visitors: 36% more than in 2015.

Other figures were also higher:

This year, for the first time, the show staged the Milipol Innovation Awards, which pinpoint the latest innovations in the sector from all over the world. This initiative rewarded 5 companies for their relevant and innovative solutions:

« Rising to the challenge of a safer world: this was the watchword for Milipol Paris 2017. The trust expressed in us by exhibitors, visitors and experts in attending this 20th edition illustrates the crucial importance of this challenge today. It also demonstrated the event's unique position in the global security market », says Yann Jounot, Préfet, Chairman Milipol Events.

Milipol Paris, an international event for internal State security organized under the aegis of the French Ministry for the Interior, in partnership with the French National Police and Gendarmerie, the French Civil Security and Crisis Management Department, the Ministry of Economy and Finance, the French Customs Department, the French Community Police and Interpol. For more than 30 years the Milipol brand has been synonymous with high quality international trade shows involved in internal State security matters.
Over the years the Milipol trademark has been proudly represented by Milipol Paris and Milipol Qatar. At present the Milipol network is growing with an Asia Pacific edition that completes the offer responding to a strong demand from the sector’s main actors. Milipol is taking over Global Security Asia, an exhibition created in 2005 and renamed Milipol Asia-Pacific. As a result, Milipol is establishing a wider scope in its domain by including a highly successful and reputable event.
For more details on Milipol Paris 2017 please visit: https://en.milipol.com

Milipol is organised by COMEXPOSIUM. COMEXPOSIUM, 4th leading event organiser world-wide, is involved in 114 events for the general public and professionals, covering 17 different sectors. The group welcomes 38,000 exhibitors every year, 40% of them are non-French; 3,5 million visitors, 350,000 of them come from abroad. COMEXPOSIUM organises 5 of the 10 biggest events held in France: SIAL, Foire de Paris, Intermat, SIMA and Paris International Agricultural Show. Customer satisfaction, innovation, growth and development and commitment to an eco-friendly approach are the key commitments of the COMEXPOSIUM Group’s products. Each event is a market leader, facilitating development, highlighting the sector and pre-empting market trends.
For more details, please visit: www.comexposium.com