Milipol Paris is the leading event dedicated to homeland security. The 21st edition will be held on 19-22 November 2019 at Paris-Nord Villepinte Exhibition Centre. In 2015, the event still succeeded in attracting no fewer than 1,005 exhibitors from 53 countries, 29,939 visitors from 151 countries and 161 official delegations from 77 countries.

Milipol is a brand of the consortium, whose members include CIVIPOL, THALES, VISIOM and PROTECOP.

CIVIPOL: The consulting and service company of the French Ministry of the Interior provides services in the areas of homeland security, civil protection and governance to clients in France and abroad.
CIVIPOL also works in partnership with other market stakeholders and is a member of several professional networks such as the “Conseil des industries de confiance et de sécurité » (CICS), the « Groupement des industries françaises de Défense terrestre et aéroterrestre » (GICAT) et « Syntec Ingénierie ».

THALES: From Aerospace, Space and Defence to Security and Transportation, THALES helps its customers to create a safer world by giving them the tools they need to perform critical tasks. World-class technology, the combined expertise of 62,000 employees and operations in 56 countries have made THALES a key player in keeping the public safe and secure, guarding vital infrastructure and protecting the national security interests of countries around the globe.

VISIOM is the french leading company, in luggage’s security and control. VISIOM has a large range of technological solutions answering the needs of its clients all over the world.

PROTECOP: Supplier to the military and government agencies both in France and abroad since 1982, PROTECOP has been designing, manufacturing and developing products direct from our R&D and our workshops or imported from the best specialists in the world. 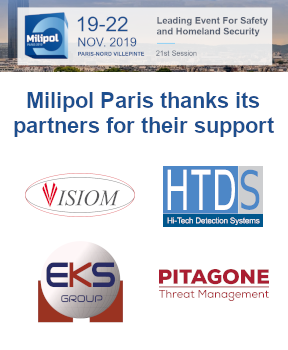