Vice-President, Strategic and Major Accounts, responsible for Europe, Africa and the Middle East at Genetec Inc. 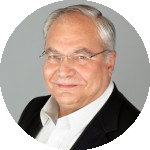 Mr. Ted F. Ghali is Vice President, Strategic and Major Accounts, responsible for Europe, Africa and the Middle East at Genetec Inc., a Canadian-based software company in the field of physical security.

During his career, Mr. Ghali held various administrative positions in the private sector of consulting engineering firms. He worked for the Canadian International Development Agency (CIDA) by leading several trade missions. He has been a member of the Board of Directors and Vice-President of the St. Laurent Chamber of Commerce in Montreal, Canada.

A graduate of École Polytechnique de Montreal in construction, civil engineering and HEC Montreal, in management and marketing. He is married and resides in France.

Mr. Ghali is also a Director, Executive Vice-President and member of the Bureau of Cercle des Dirigeants d’Entreprises Franco-Quebecois.