National Coordinator for the Safety of the 2024 Olympic and Paralympic Games and Major International Sport Event. 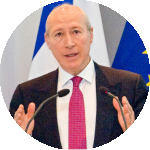 Prefect Pierre LIEUTAUD began his career in 1979 as an career officer at the Saint-Cyr Military Special School. He became major of his promotion.

After a military career as an officer in the 2nd foreign parachute regiment then in the specialized services of the Ministry of Defense, he was appointed sub-prefect in 1996, chief of staff of the prefect of Charente Maritime, then of the Guadeloupe region until in 2000.

After a career as Comptroller General in the National Police from 2004 to 2009 at the DCRG, at the DGGN and as a deputy national intelligence coordinator, adviser for intelligence to the President of the Republic.

He is appointed Prefect, Secretary General of the National Intelligence Coordination at the Presidency of the Republic from 2009 to 2014.

As part of the Ebola Interministerial Task Force, he is appointed National Coordinator Delegate to the Prime Minister in 2015.

After being involved in the setting of the 2025 World Exhibition, he has been appointed National Coordinator for the Safety of the 2024 Olympic and Paralympic Games and Major International Sport Events since April 2018.