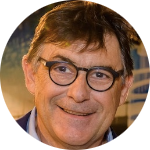 After an initial career of 25 years of economic journalism and the creation in Lyon in 1985 of a specialised economic press agency in the Rhône-Alpes region for all major national and specialised economic media (JAM), Olivier became director of the Agence Réédition, specialised in the council, lobby and the strategic communication in private security. Olivier Duran was also Director of Communication (delegate), spokesperson and advisor to the President of the National Union of Security Companies until June 2019, accompanying the development of private security companies or organisations, taking into account all the issues of global security in both the private and public sectors with a strategic lobby dimension.

He holds a degree in economics from Paris Assas and a degree in information sciences, and he is auditor for the INHESJ and at the Paris-Descartes University.