Director of the Research Center of Gendarmerie's Officer School. 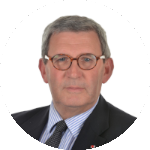 Former Inspector General of Armies, General of the Army (2S) marc Watin-Augouard has been a security advisor to Nicolas Sarkozy and Dominique de Villepin, ministers of the Interior.

In 2005, he was rapporteur of a working group on cybercrime, chaired by Thierry Breton, then president of France Telecom.

In 2007, he founded in Lille the International Forum of Cybersecurity (FIC).

Since 2012, he directs the research center of the EOGN and co-directs the FIC. He is the referent of the national session "numerical sovereignty and cybersecurity" of the IHEDN and the INHESJ.