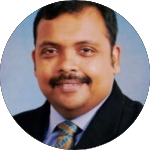 Kumar Ramakrishna is a tenured Associate Professor and Head Policy Studies, as well as Head of the National Security Studies Programme, in the Office of the Executive Deputy Chairman, S. Rajaratnam School of International Studies (RSIS), in Nanyang Technological University, Singapore. He was previously the Head of the Centre of Excellence for National Security (CENS) at RSIS from 2006-2015.

A historian by background, Associate Professor Ramakrishna has been a frequent speaker on counter-terrorism before local and international audiences, a regular media commentator on counter-terrorism, and an established author in numerous internationally refereed journals. His first book, Emergency Propaganda: The Winning of Malayan Hearts and Minds 1948-1958 (2002) was described by the International History Review as “required reading for historians of Malaya, and for those whose task is to counter insurgents, guerrillas, and terrorists”. His second major book, Radical Pathways: Understanding Muslim Radicalisation in Indonesia (2009) was featured as one of the top 150 books on terrorism and counterterrorism in the respected journal Perspectives on Terrorism, which identified Associate Professor Ramakrishna as “one of Southeast Asia’s leading counterterrorism experts”. His most recent books are Islamist Terrorism and Militancy in Indonesia: The Power of the Manichean Mindset (2015), Original Sin? Revising the Revisionist Critique of the 1963 Operation Coldstore in Singapore (2015), and Singapore Chronicles: Emergency (2016).