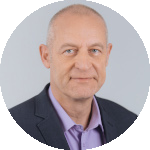 Over his 30-year career with Thales, Gérard Herby has established a record of success in the development of complex systems and value-added services for some of the world's most demanding defence and security customers.

He graduated from Télécom ParisTech (formerly École Nationale Supérieure des Télécommunications) in 1984, beginning his career as a telecoms development engineer with the Philips subsidiary TRT, which became part of the Thales (Thomson-CSF) Group in 1990.

Since then, Gérard Herby has held a series of senior operational management positions at Thales, including product line manager for land and airborne optronic surveillance systems and export marketing director for the command information systems (C4I) business. He was appointed Vice President, Land Tactical Systems in 2009.