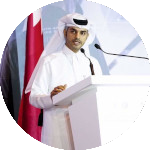 Mr Falah Al-Dossari has over 15 years’ experience in law enforcement and security and is recognised as an INTERPOL Certified Expert in International Law Enforcement Cooperation. He is currently seconded to INTERPOL from Qatar’s Ministry of Interior as the Senior Manager for Project Stadia, which has created a Centre of Excellence and become the international reference point for those involved in planning and executing policing and security preparations for major sporting events.

Mr Al-Dosari has extensive experience in international policing and security developed through undertaking leadership roles with:

He has been involved in the development and delivery of policing and security plans for a range of national and international events including: