Vice-President Security and Protection of Groupe Renault, and President of the Private Security Commision of the Club of Business Security Directors (CDSE). 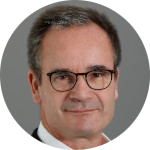 Born January 14, 1968 in Toulon (France), Eric Balastre holds a degree in engineering from the French Naval Academy, obtained in 1990. He began his career in the Navy and in 2001 became commanding officer of the "Commando Hubert" (Navy SEAL unit).

Éric Balastre joined the Renault group in 2004 as head of a branch's workshops and then sales manager at the Nord regional management. In 2009, he was appointed deputy head of the quality department at the Renault factory in Flins-sur-Seine (France).

He joined the Group's Prevention and Protection Department in 2013, where he was appointed Director of Operational Implementation France and Country. A position he held until his current appointment in November 2018, as VP, Group Security and Protection.

Eric Balastre is auditor of the 68th session "Defense Policy" of the IHEDN (Institute of Higher Studies of National Defense) and member of the Board of Directors of the CDSE (Enterprise Security Directors' Club).