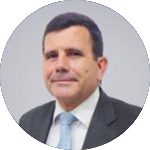 Emmanuel Germain is a Saint-Cyrien (engineering option), doctor of public law and holds an MBA from HEC. Officer of the navy troops, he has spent most of his career in the field of operations, in France and abroad.

He also served at the Minister of Overseas Detachment of the prefecture of Mayotte from 2003 to 2006. He attended the formation of the NATO Defense College (NDC) in Rome in 2014 and exercised a power within the Army Headquarters in the areas of capability and operations.

He is Deputy Director General of ANSSI since 1 November 2016.