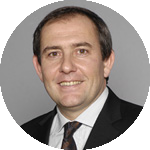 Former student of Prytanée Militaire de la Flèche, Sciences politiques, postgraduate finance and law degree, Daniel Le-Coguic has a career at Bull in IT, ran subsidiaries in Central and Eastern Europe. During the fall of the Berlin Wall in 1990.

He was a member of Bull's Executive Committee in 2005 as Vice President, Bull Global Network Responsibility and CEO of Bull Germany. After 18 years of expatriation, he returned to France to head Bull's product and technology division. Finally, he manages the Bull France subsidiary before joining Atos in the acquisition of Bull by Atos in 2014.

Today, Senior Vice President at Atos, he is in charge of the Big Data and Security division in France and coordinator Atos activities for Paris 2024. He is in charge of the program to secure major events and the 2024 Olympic Games at Filière's Strategic Council since January 2019.