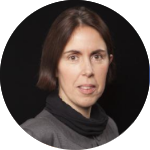 Secretary General of Defense and National Security since March 5, 2018, Claire Landais is a graduate of the Ecole supérieure des sciences économiques et sociales, the Institut d’études politiques of Paris and the Ecole Nationale d’Administration (promotion "Averroès", 2000).

She has been a State Councilor since 2000, working in the litigation section and then in the public works section. Ms. Landais becomes Government Commissioner in the litigation section of the State Council in 2007, and then serves as Director of Legal Affairs of the Ministry of National Education and the Ministry of Higher Education and Research from 2008.