Director General of the Confederation of European Security Services (CoESS). 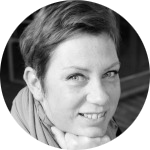 At a strategic time for private security industry, she aims to increase its visibility and demonstrate its willingness and ability to contribute to the global security offer, in partnership with public law enforcement agencies (LEAs) and relevant stakeholders, so as to form a security continuum. She coordinates and co-writes the latest CoESS White Paper “The Security Continuum in the New Normal”, published at the 6th European Security Summit in October 2019, and steers the discussion on optimising and drafting best practice for Public-Private Partnerships and the two-way communication between LEAs and Private Security Companies.

Her priorities as the Director General of ASSA-i and CoESS include Transport Security, Insider Threat, and the protection of Critical Infrastructure as well as of public spaces. Catherine coordinates the work on all these issues, and is active in the standardisation activities on behalf of the private security industry, as the chairwoman of CEN TC 439 “Private Security Services” and an active member of ISO TC 292 WG6 “Protective Security”.

A professional European lobbyist since 1990, Catherine has been in a European Association leadership role since 1997.