Vice-President of the Region Sud and Deputy Mayor of Marseille. 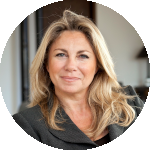 As a graduate in criminal law and sciences, Caroline POZMENTIER-SPORTICH has been barrister in Marseille before her first election.

Between 2015 and 2017, Caroline POZMENTIER-SPORTICH has previously been working to develop an all-new regional policy of security and delinquency prevention in Provence-Alps-Côte d’Azur. As a Smart Region-to be, the Regional Council has strengthened its involvement in the safety of the regional high schools and railway network (“TER”) and in natural hazard management, and built an innovative security policy based on financial support and inclusion of private sector with the ambition of affirming itself as one of the main partners of the State and other local authorities for maintenance of law and order.

Since 2008, Caroline POZMENTIER-SPORTICH has also been implementing the Public Security and Delinquency Prevention policy of the City of Marseille. Within ten years, she has initiated an unprecedented reinforcement of the Local Police of Marseille, building it as the first local police of France with a more than 400-strong team equipped with bulletproof vests, non-lethal and lethal weapons, body cameras, professional PDA, and now able to deploy a night squad. To support their work, she has supervised the development of a video-protection network covering the whole area of Marseille with more than 1.000 cameras (1.500 by 2020) connected to an urban monitoring center working 24 hours a day and soon equipped with Video Analytics software. Today, her next project consists in allowing the use of big data to enhance the efficiency of the police presence thanks to the latest IT, with the belief that becoming a Smart City will let Marseille become a safer city. This whole policy comes within the framework of a “security partnership” with the State Police and all the institutions involved in the security of people in Marseille.