Director General for International Relations and Strategy, Ministry for the Armed Forces. 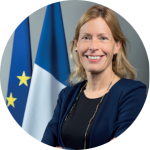 Graduated from the Paris Institute of Political Studies in 1997 and the French National School of Administration in 2000, Alice Guitton began her career as Desk Officer for the United Nations and International Organisations Directorate (Ministry of Foreign Affairs, Paris) before being appointed First secretary at the French Embassy in the United Kingdom (London).

In 2009, she became Director for Democratic Governance at the Directorate-General for Globalisation, Development and Partnerships (Ministry of Foreign Affairs, Paris), then Member of the Cabinet of the High Representative of the European Union for Foreign Affairs & Security Policy/Vice-President of the European Commission (Baroness Catherine Ashton), and finally advisor to the Secretary General of the European External Action Service, Brussels.

From 2012 to 2015, she was Deputy permanent representative of France to the North Atlantic Treaty Organization (NATO) before being appointed Ambassador and Permanent Representative to the Conference on Disarmament.

In 2018, she is appointed Director General of International Relations and Strategy.