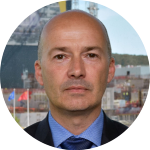 Since January 2012 Christophe Ramu is part of the international organization ITER where he is the Head of the Health, Safety, Crisis Management and Security Division.

This international organization represents 35 countries which are engaged in the construction of the largest tokamak ever conceived, a machine which must demonstrate that fusion (the energy of the Sun and stars) can be used as a large-scale, non-CO2 emitting energy source to produce electricity.

The results of the ITER science program will be decisive in paving the way for the fusion power plants of tomorrow.

He assists the General Manager and the Head of the Safety and Quality Department in all matters related to health, safety, emergency management and security, in compliance with the safety and security regulations of the host country.

Christophe Ramu previously held important responsibilities in the Marseille marine fire brigade (B.M.P.M.), which he joined in 1993, and in the French Navy. In particular, he was in charge of setting up the conventional safety organization during the construction phase of the aircraft carrier Charles-de-Gaulle (1996-1998).

He also led several missions as "Head of mission" for the European Commission in order to evaluate the security of ports and port infrastructures in Maghreb countries and to assess the quality of the European response in the framework of crisis management.

Christophe Ramu is also the President of the Agora of Security Directors of Provence since its creation in 2015. This is a permanent and regular forum for exchanges and sharing of experiences that promotes a forward-looking approach to security for Security and Safety Directors.