President of the FNCCR's "digital uses and smartcity" commission 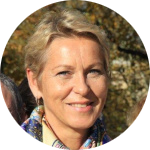 Anne Le Hénanff is a business leader in charge of consulting and communication, deputy major of the city of Vannes, in charge of digital systems and communication since 2008 and responsible for the Gulf of Morbihan in Vannes agglomeration. Particularly committed to the challenges of digital transformation, she is the creator and director of the Cyber West Challenge, founding member of Women4Cyber, correspondent for the city of Vannes since 2014 and auditor of the IHEDN (regional session Caen / Rennes in 2014) .

Member of the ONAC 56 County Council and elected to the Megalis Bretagne Trade Union Committee from 2008 to 2014 and since the beginning of 2017, Anne Le Hénanff has been a Cyber Reservist since 2015 and member of the CyberTaskForce

Anne Le Hénanff, holder of the cybersecurity chair for major events at the University of Brittany, is also director of the IN-CRT (national institute for cybersecurity and resilience of territories).